May the Devil Take You Too 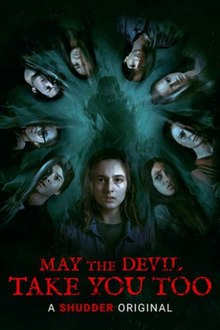 Two years have passed since the events in the last film, however Alfie is still experiencing paranormal phenomena. One day she and Nara are kidnapped and taken to an abandoned orphanage by a group of strangers introducing themselves as Leo, Marta, Kristi, Budi, Jenar, and Gadis. The group used to live at the orphanage and continued to even after its closing and the death of the owner's wife. They were abused by the owner, Ayub, who worshipped Moloch, prompting them to burn him alive in the home's cellar. Gadis insisted that his spirit was following and cursing them, however they didn't believe her until a seventh person in their group, Dewi, was killed in a supernatural fashion.

The group demands that Alfie come with them to the cellar and use a black bible to end the curse, aware that her father had used a similar one. Alfie reluctantly participates in the ritual, only for it to have the opposite effect and set Ayub's spirit free. The group is murdered one by one until only Budi, Marta, Leo, Alfie, and Nara remain. Alfie realizes that they were all tricked by Gadis, who had likely experienced Stockholm syndrome as a way of dealing with the abuse. She had faked her death by Ayub and had also killed Dewi. Gadis then kills Marta and Leo. Alfie faces off with Gadis, but is forced to use the black bible to effectively fight her. This has a temporary demonic impact on her body.

Gadis takes advantage of a lull in the fight to give herself over fully to Ayub and Moloch, resurrecting Ayub. He then tries to possess Budi, but is stopped by Alfie, who he then tries to possess. Knowing that she cannot allow him to take over her body, Alfie stabs herself in the heart, killing herself and Ayub. Her life is restored by Moloch, who says that she can only die in a way he sees fit and that suicide is an affront to him, as it is her acting like she owns her own soul. Alfie drives off with Budi and Nara. She knows that the fight is not over, but she now has an additional person on her side as well as the black bible.